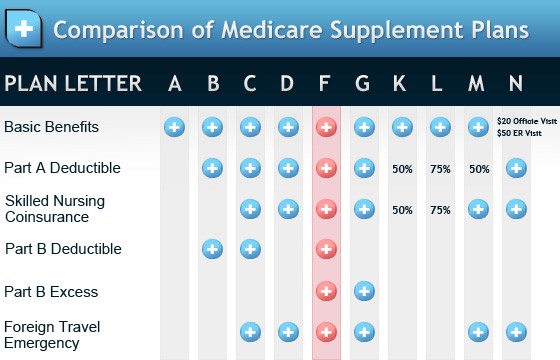 These plans are considered as the most comprehensive ones among other types. They settle all your expenses that have been approved by Medicare. You need to know that Medicare does not pay for these expenses, since it only approves. The expenses that are settled include coinsurance, co-pays and deductibles that are not covered by the original Medicare. Plan F is also regarded as the most expensive plan and it’s best for those who feel they have to pay medical expenses later and those who want all their approved expenses to be covered.

When your deductible is handled, all your expenses will be paid by High deductible Plan F and Plan F, but not by Medicare. The deductible amount for 2015 was $2180 and it keeps changing every year. This plan is the best for those with a good health condition and those who are ready to take risk in exchange for a lower rate.

There are nine plans lying between the full coverage plans and the deductible plans. Hence, if you are not fine with both of them, you could choose those 9 plans.

Check with a Medicare Enrollment Representative to see if you qualify for $0 premium Medicare Supplement, Medigap and Advantage Plans.